I was tired, it had been a long day.  I flew to Wyoming, shopped at Wallmart for essentials, gone to the reception, handed out about 200 flyers and talked non-stop about Alaska (O.K. that wasn't hard) and now it was 7:00 and I was hungry and tired.

I went to the hotel's restaurant and ordered dinner; a shrimp cocktail and s bacon salad.  Yes, I said bacon salad...that was not what was on the menu, that is what I said.

The menu had a spinach salad with bacon, I obviously was just interested in the bacon, so I ordered the bacon salad and didn't even realize what I said.

"Bacon salad?" the waiter asked and then started to laugh.

I was a little put-off by this rude waiter who laughed at people's orders until I realized what he said.  I started to laugh to and said, "I'll take some spinach with that bacon, and you better bring me a glass of wine."

So, any recipe I make with bacon is just an excuse to eat more bacon.  So here is another one.   Plus it is green, a good color for dinner on St. Patrick's Day!

Spring is asparagus season and we do love asparagus.  This soup is easy and fresh.  It is another good excuse to eat bacon your veggies! 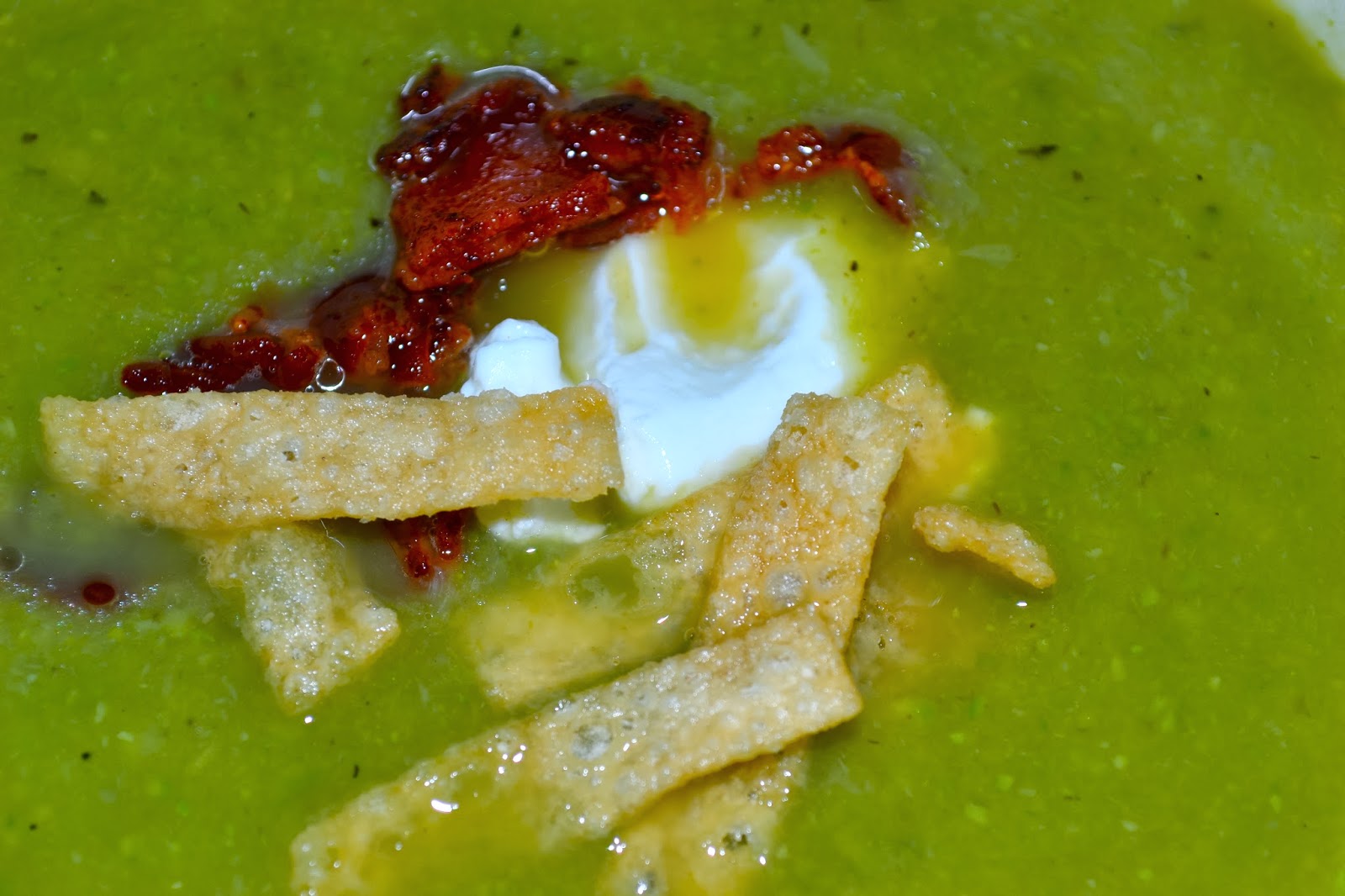 Slice the dark green tops off the leeks and discard.  Slice the remaining white and light green parts in half lengthwise and rinse well between each layer to remove any trapped dirt.  Chop coarsely.

heat the oil in a large soup opt over medium-high heat.  Reduce the heat to medium, ad the leeks, and cook until tender but not brown.  about 4 minutes.  While the leeks are cooking, peel an dice the potato.
Stir the dried thyme, salt, and pepper into the post.  Add the potato and broth and bring to a boil over high heat.  Then reduce the heat to medium low, cover and simmer until the potato is nearly tender, about 5 minutes.  While the potato cooks, trim off and discard the woody ends of the asparagus, and cut into 1 inch pieces.

Add the asparagus to the pot, return to a boil over high heat and then reduce the heat to medium low and cook, covered until the asparagus is just tender, about 5 minutes.  Allow to cool slightly, about 5 minutes, then puree in a blender in 3 batches, or go for it with your immersion blender (like I do).  Transfer (if blending) back to the pot and stir the lemon juice into the puree.  Serve garnished with yogurt, bacon and won ton strips, if desired.

1 year ago:   Carrot Cake Roulade and a good try
2 years ago:  Crab and Goat Cheese Ravioli