Baked Spaghetti Squash with Sausage and the Lost Week 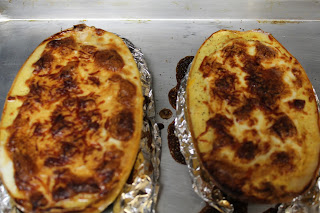 I don't know where last week went. I was drugged for most of it, so really, I don't know were it went.  We flew down to Anchorage last Sunday night.  I had a pre-op appointment on Monday and Tuesday I had the second of my three reconstruction surgeries.  This surgery was to take the tissue expander out, put the implant in and then give the other girl a lift so they are more symmetrical.  The surgery took about 2 hours and I was "home" by noon.

We rented through Air BnB this time and it worked out like a charm.  We had a lovely 2 bedroom apartment so I could sleep and Dave had room to work, watch t.v., make meals (we didn't have to eat out every meal this time) and I could wander around in my jammies and not have to worry about getting dressed if I wanted a snack.  The apartment was 10 minutes from the surgery center and 10 minutes from the doctor's office.

On Monday morning we had another post-op appointment, the stitches were removed and we were able to jump an earlier flight to fly home.  I just have to wear this tape over all the scars for the next 6 months...yes, 6 months.  It is so the scars heal as small and as flat as possible.  I feel like I'm taping my boobs and my one little nipple that is left, every time I have to change the tape.  But everything went well, no surprises and the one cyst (on the healthy side) my surgeon removed and had it biopsied. It WAS nothing just like everyone thought.  My surgeon is a rock star and I can't say enough good about her and her whole incredibly awesome staff. I'm also glad that I don't have see any of them until the end of the month for my 4 week check. (Edited by Dave - She's still on Valium) 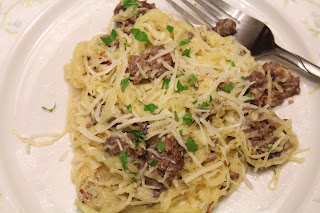 One limitation while I heal is that I am not to lift ANYTHING, no pushing the vacuum and no getting jumped on by the dogs (Dave has to get up in the morning with me because HIS dog is still too much of a puppy.  We compromised on me staying in bed until 6:00 and he gets up with me then) BUT no reaching for stuff.  I know it sounds great, the no vacuuming part especially, but I'll get tired of it way before that restriction is lifted.  So I'll try to be good as long as possible, but I'm not promising anything. (SFX Insert: You'd better promise FFS! - Dave ....... I'm editing remember?)

In the meantime, Dave has been doing everything, so I thought I would start making dinner again.  I work most of the day, come home and take a bit of a nap and then start dinner.  Meals will have to be pretty simple but at least it is something I can do... as long as Dave gets the heavy pots and pans and sets them on the stove for me.

This recipe showed up in my Facebook feed and I thought it looked delicious.  It is! It is rich and indulgent.  I added some moose sausage to the finished dish and it was a wonderful dinner.

1 large spaghetti squash, cut in half and seeds scooped out (Dave had to do that for me)
5 cloves garlic, minced
1/2 cup water
1 chicken bullion, I use the "Better than Bullion" paste
1 cup heavy cream
1 cup 4 cheese Italian white blend
fresh thyme
pepper
1 lb. sausage, optional

Bake for 40-50 minutes or until the flesh pulls easily with a fork.

Meanwhile, brown sausage until cooked completely.  Drain on paper towel lined plate.
Pull squash strands from the rind and place in a large bowl, mix in the sausage and top with more fresh thyme or parsley.  Serve.

1 year ago: Loving things Your Husband Says and A Taste of the Islands Drink of the Week
3 years ago: Sick Dogs
5 years ago: Wearing Blue Pants with Black Shoes and Chocolate Martini