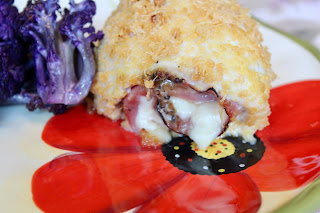 I'm not saying my husband deserved this, but he has been telling everyone since I had foot surgery this year he was off the hook...not so much.

About a week ago, Dave woke up with such a pain in his foot he couldn't walk.  Well, not really his foot but his big toe.  He thought he had sprained it or hurt it somehow while he was working on the truck but he couldn't think of a time that he would have hit it hard enough for it to hurt this much.  He was talking to my dad and my dad said it sounded like gout.  Dave googled it and talked to a friend and sure enough it did sound like gout.  Dave called my foot dr. and piggy backed on to my next appointment a bit more than a week away.  He iced, ate tart cherries and tried to stay off it as much as possible.

So, while I have always tried to get him to eat more chicken and fish he is now more on board with it than before.  And while he won't be giving his red meat and beer up, he did decide he would cut back.

I made this chicken dish trying to get him to happily eat chicken, I'm always trying.

Preheat oven to 350°F.  Line a baking sheet with parchment.

Make breading station by whisking egg with 1 Tbsp. water in a small bowl and mixing pork rinds and parmesan in a second small bowl, set aside.

Slice chicken breasts horizontally and lightly pound each cutlet to make an even thickness.  Sprinkle salt and pepper over each cutlet, spread mustard on each cutlet.  Lay 2 pieces of ham and 1 piece of cheese on each cutlet, roll starting with the thinnest side and secure with a toothpick.  Dip chicken roll in egg and then into the pork rind/parmesan breading.  Place on cookie sheet.  Repeat with the other three chicken rolls.
Bake for 30 minutes.  Remove toothpicks and serve.

1 year ago:    Blueberry Picking and Blueberry Crumble
3 years ago:  Introducing Grayson Zachary and the Beginning of the Grandma Adventure
5 years ago:  Chicken with Mushroom and Almonds and the Prank