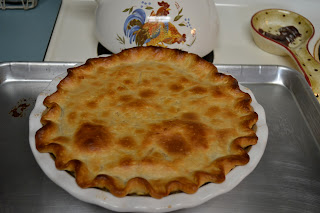 It had been a really bad day.  It was late Spring, a cold and rainy day.  The day had won, and I had cried on the phone to my husband (if you don't already, you should really feel sorry for my husband).  Dave decided to turn my frown upside down and planned a surprise for me.  He was going to build a fire, pour a good glass of wine and take me out to dinner, what a sweetheart!  It did not go as planned.

He started by getting the fire ready, or trying to.  When he opened the door to the wood stove, a bird flew out, brushing his face on the way by!  Keep in mind, it was Spring and we hadn't used the wood stove for about 6 weeks.  Some poor bird had roosted on the edge of the chimney and fallen down the pipe, then was stuck in the closed wood stove.  The poor bird flew back and forth from the large living room windows to the large kitchen windows, trying to find a way out.  Poor Dave, chased the bird back and forth trying to catch it by throwing a towel over it to get it outside.  The bird flew, leaving black soot marks on the ceiling every place it hit and Dave chased back and forth until he finally caught the bird and released it into the open air via the back door.

Not swayed from his mission, Dave built the base for the fire, newspaper, kindling and wood, and started it.  He heard a frantic rustling in the stove pipe, another bird was in the chimney.  He rushed to put the fire out, pulling burning newspaper and kindling onto the hearth and filling the house with smoke, and then proceeded to chase that bird back and forth, back and forth until it was finally caught and released into the wild.

This kindhearted man bent down to rebuild the fire, again, so the house would be nice and toasty when I got home...that is about the time I got home.  When he looked up from the wood stove, he was hot, sweaty and ash streaked from the birds flying past his face.  The ceiling was black marked from the ash covered bird heads hitting it and the house smelled of smoke.  I burst into laughter as did he.  Poor guy, goes to show you, no good deed goes unpunished.

About that time my brother-in-law pulled up for dinner.  We opened a window to air out the house and left the black streaks on the ceiling for another day.  A good glass of wine (or two) and the story being retold by Dave for my brother-in-law and me really did chase away the bad day.  Too bad  it was such a bad day for Dave, not to mention those poor little birds.

For cold, rainy spring or summer days nothing warms up the house like a fire in the wood stove and a hot bubbling chicken pot pie fresh from the oven.  The blond boy is particularly fond of chicken pot pie and this used to be a regular on the dinner menu when he lived at home. 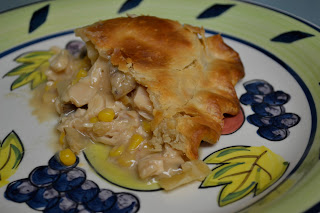 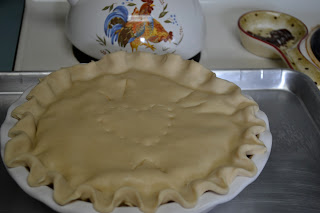 Preheat the oven to 350º F.
Place the chicken breasts on a baking sheet and rub them with olive oil. Sprinkle generously with salt and pepper. Roast for 35 to 40 minutes, or until cooked through. Set aside until cool enough to handle, then remove the meat from the bones and discard the skin. Cut the chicken into large dice. You will have 4 to 6 cups of cubed chicken.
In a small saucepan, heat the chicken stock and dissolve the bouillon cubes in the stock. In a large pot or Dutch oven, melt the butter and saute the onions over medium-low heat for 10 to 15 minutes, until translucent. Add the flour and cook over low heat, stirring constantly, for 2 minutes. Add the hot chicken stock to the sauce. Simmer over low heat for 1 more minute, stirring, until thick. Add 2 teaspoons salt, 1/2 teaspoon pepper, and heavy cream. Add the cubed chicken, corn, potatoes. Mix well.
Preheat the oven to 375º F.
Line pie plate with first pastry, carefully pour in filling, cover with second pastry and cut slits for steam to escape. Brush pastry top with cream.  Place on a baking sheet and bake for 1 hour, or until the top is golden brown and the filling is bubbling hot.

Tips:
I have been known to purchase a rotisserie chicken from the grocery store and use that instead of the chicken breasts.

I have also been known to use a pkg. of frozen mixed veggies.

My first chicken pot pies were made from store bought crusts,  a rotisserie chicken, a can of mushroom soup, a jar of chicken gravy and a bag of frozen veggies.  My kids loved it!  You will love this one even more.