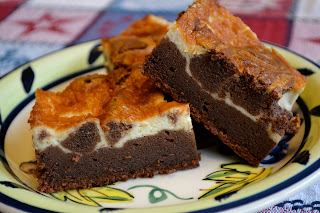 My dad is very forgetful, he is the perfect absent minded professor (yes, he was an engineering professor at University of Alaska in Fairbanks).  He is forgetful and he is a master at being lost in thought but still making the "uh huh" sound needed when someone is talking to you and you need to answer, but you really weren't listening...

In the summer, when we came to Alaska, we often went camping.  We had a camper on the back of a pick-up.  The 7 of us kids would ride in the camper (it was legal way back then) and my dad and step-mom would ride in the front.  Kids would get to take turns in the front (and if you got car sick you got extra turns, guess who got car sick.).  We had an intercom and before we would pull out my dad would say over the intercom "Count off."  We each had a number, one for the youngest and up to 7 for the oldest and we would have to yell our number in the direction of the intercom. (My number was 3, the same number of one of the greatest Yankee players of all time)

One trip, we stopped for gas at Curry's Corner.  My dad was pumping the gas, my sister and I told Dad we were going in for some candy was that o.k.?
"Uh huh" he answered.
We skipped in, feeling rich with our fifty cents each and we drooled over the candy selection until we finally decided on how to best spend our big bucks.  We trooped outside, ready to load into the camper for the long drive to where ever it was we were going... and the camper was gone.

Thinking it was a joke we looked around and ran around the corner of the building, no camper.  We went inside, burst into tears and exclaimed that our family had left us!  The poor store owner was stuck with two sticky, crying girls (and this was long before cell phones).  He called the troopers, fed us ice-cream and hoped for a quick return.  Surely someone would miss these two adorable children sooner rather than later.

Well, my dad was happily headed down the road (and apparently had forgotten to have the kids count off) happy as could be, when he ran into some stopped traffic for a motorcycle accident.  One of the troopers walked up to my dad's window.  Dad rolled the window down.
"Are you missing anything, sir?" the trooper asked.
Dad check his wallet for his driver's license; it was there.
"No, I don't think so," he answered.
"I mean are you missing anyone, sir?" the trooper rephrased his question.
Dad called into the intercom, "Count off."
"One." Kary answered
.
.
.
.
My sister was two and I was three so the count off ended right there.
They turned around and came back to get us.  We were finished with our ice-cream and ready for the ride.  My dad was so upset, I don't know if it was because he left us or he didn't believe us when we told him we had asked for permission.
I don't think he ever forgot to call for a count off again.

While these brownies have nothing to do with that story, I did retell that story to some friends while we ate these the other day.  It makes me laugh to think about now, but back then my sister and I were really upset.  Chocolate is the best thing to feed people who are upset, or forgotten at the gas station.  I found these on the blog A Little Bit of Everything from pinterest.  They are dense, chocolaty, creamy with the Mascarpone cheese and oh, so delicious. 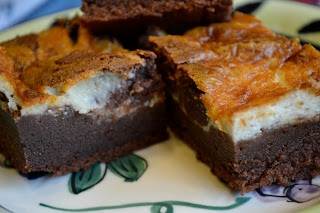 Ingredients
Instructions
Notes
If you don't have cake flour you can make your own by placing two tablespoons of cornstarch in a one-cup measure. Fill the rest of the cup with all-purpose flour. Sift together and use it. 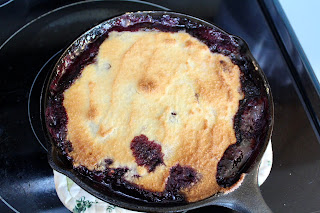