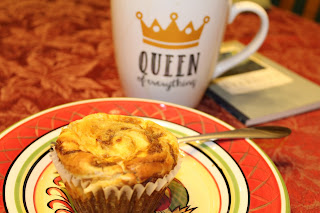 The other night I was getting ready for bed.  Dave sleeps with a sheet and a fan on.  Because of the fan I sleep with the sheet, two blankets and the comforter/bead spread.  And now I am sleeping with long pants.  I used to sleep in a long t-shirt but I was waking up cold since I've been battling this infection in my chest, so I've started wearing pants.

Now, I have lots of flannel pajama pants I wear in the mornings when I get up at 5:30 and have my quiet cup of coffee next to the fire, but I found those a little too heavy to sleep in.  I have one pair in particular that is a lighter fabric, doesn't stick to the sheets like the flannel kinds, and keeps me warm enough to sleep through the night with my 2 blankets and comforter.  Perfect!

So, Dave does the laundry and the other night, as I was getting ready for bed, I asked Dave, "Did you wash my sleeping pants?  Are they in the laundry room?"

"What are sleeping pants?" He asked with a laugh.
"You know, the pants I sleep in." I replied, surprised. (He had mentioned he noticed I was wearing them to bed recently.)
"Nobody calls them sleeping pants." He scoffed.
"Yes they do, what else would you call them?"
"Nope, everyone calls them pajama pants, pajama bottoms or just pajamas." He is laughing hard now.
"I don't think so," I'm getting a little annoyed, "You don't know what you are talking about." I declare.
"Ask Donna when you go to coffee on Saturday.  Better yet, make it the survey question of the day." He is really getting a good laugh rolling now.
"I will, and you'll see you are wrong." I say indignantly.

So, on Saturday, I'm having coffee with Donna, ready to survey the crowd I asked her first, "What do you call the pants you sleep in?"
Her answer? "Pajamas."
Just like that, no thought to it or anything.
"Really, what about sleeping pants?" I asked.
She starts to laugh, "No one calls them sleeping pants."
"So, I shouldn't survey the crowd and ask them what they call the pants you sleep in?"
"Well," she states, trying to alleviate the hurt look on my face, "Some people might call them lounge pants, but not sleeping pants."

So I didn't survey the crowd that day, and I had to go home and tell Dave that he was correct and I was wrong mistaken, and no one but me calls them sleeping pants.  But I will forever call them sleeping pants, just to annoy my husband.

Now, in the morning, after you change out of your sleeping pants and put your pajama pants on for your coffee, you can whip up these pumpkin, cream cheese muffins.  I made them when the kids were here and everyone loved them. They were surprised to find out they were grain free and sugar free.  The curly haired boy did say he thought there was almond meal in the muffin because of the texture, and that was before I told him, but he enjoyed them.  Gman loved his, and that is all that really matters! 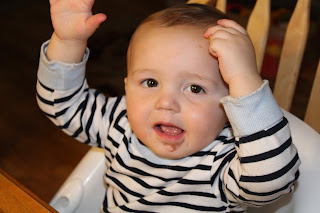 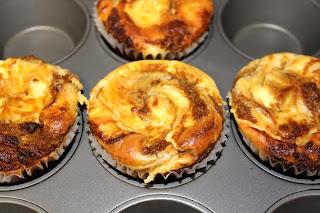 Preheat oven to 325˚F.  Place paper liners in 6 -8 wells of a standard-sized muffin pan. (The original recipe calls for 6, but they were really full and I made 7, next time I'm just going for 8).

In a large mixing bowl, stir the almond flour, baking soda, salt and spices until well combined.  In another bowl, mix together the butter, sweetener, eggs and pumpkin until smooth.  Stir the wet ingredients into the dry.  Spoon the batter into the prepared muffin cups, filling each about two thirds full.

To make the filling , using a hand mixer, beat the cream cheese in a medium-sized bowl until smooth.  Add the sweetener, egg yolk, and vanilla and beat until well combined.  Top each muffin with about 1 tablespoon of the cream cheese filling and use a toothpick to swirl it into the batter.

Bake the muffins for 30-40 minutes, until a toothpick inserted into the center of a muffins comes out clean.  Allow to cool before removing from the pan.  Store extras in an airtight container in the refrigerator for up to 3 days.  Reheat on a baking sheet in a preheated 350˚ F oven for 5 minutes or until warmed through.

1 year ago:    Orangesicle Champagne
3 years ago:  Peppermint Pretzels, and My Kind Prayer
5 years ago:  Coquito - Drink of the Week