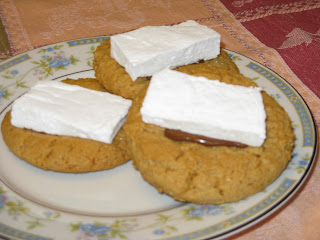 I have the luxury of a large pantry.  It was very helpful with 5 kids at home and the ability to stockpile products we used when they went on sale.  We used the space wisely and food moved through the shelves almost at grocery store rates.  Those 5 teenagers could eat!  Once a year I would take an inventory, wash the shelves, move anything that needed to be used up to the kitchen and life would go on.
Well, now that I don't really need a pantry like I used to and I don't have to be so organized, I've let it slip a little.  I don't buy much in bulk and I do try more new things knowing that Dave will eat anything once and not wrinkle his nose and announce,  "What universe do I have to be in to think this is good?" (o.k. no one ever said that out loud, not even about the fish stick casserole, but it was written all over their faces)  We do eat out spur-of-the-moment more often and sometimes unusual ingredients get left in the pantry.  Also, some helpful soul will bring over something to round out the meal, it won't get used and sits in the pantry. (I think that is where the box of chicken stove top came from, exp. 2009) And, I hate wasting food (major guilt about throwing away the box of chicken stove top that expired in 2009) so I decided to get organized and use EVERYTHING in my pantry (that hasn't expired).
So a few of the following recipes will have some unusual ingredients for me.  I don't usually use a lot of packaged foods, I really like to start fresh but somehow they show up in my pantry.  Like the three packages of cookie mix (really?), the 4 bags of marshmallows (large and small), the white chocolate covered pretzels, the jar of green curry paste, and even the funnel cake mix - complete with it's own pouring vessel!
Most of the things I'll make you can too, starting from scratch, like the fluffer nutter cookies I made with a peanut butter cookie package mix, chocolate bars left over from last summer's s'mores, and homemade marshmallows (although I do have 4 bags of marshmallows).

Make peanut butter cookies according to your favorite directions.  Roll into balls and press down with a fork, only one time (not criss-cross patterns).  Bake as usual.  When you remove cookies from the oven top with a piece of chocolate and a marshmallow (or 3-5 small marshmallows or one large cut in half).


This isn't really a real recipe, but they are delicious and after eating one(o.k. maybe two)  I sent the entire batch across the street to my neighbor for her sons to eat.  Somethings I just can't be trusted with.