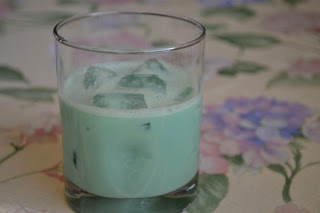 We had this drink on St. Patrick's day, and because of the spring green color, we'll have it for Easter too.  My friend Anita gave me the recipe, it is a drink she and her sisters drank on one of their all sister get-aways (I think she has 5).  So, I was going to talk about how wonderful it would be to have so many sisters to grow up with, share clothes with, fight with, and how nice it is they still all get together once in a while even though they live all over the country.  But then dinner happened...

We invited my 85 year old mother in law, June, over for St. Patrick's Day dinner.  She came, my brother in law came and two Ryans showed up at the last minute.  We had corned beef, bangers and mash and cabbage. For dessert we had carrot cake cupcakes to celebrate my husband's birthday from the day before and we had Anita's Green Drink.  Everyone showed up wearing green, June wore a new bright green jacket to celebrate the day.  We sat down to dinner and began to serve off the large platter in the center of the table.  I asked June if she would like a banger (sausage) and she said yes.  I picked up the sausage with rubber tipped tongs (can you see it coming?) and headed toward her plate.  Just before I started putting the sausage down, the greasy sausage slipped on the rubber ends of the tong and hit June right in the chest and rolled down her NEW green jacket and landed in her lap.  I could have crawled under the hard wood floor of the dinning room.  She plucked it off her lap and put it on her plate.  I offered her a sweatshirt and to wash it right away but she declined.  She wore the grease marked jacket all through dinner.
When we were about finished Dave made another round of Anita's Green Drink for both Ryans.  The first Ryan declined since he was driving, so Dave gave the second Ryan a double.  I asked June if she wanted more and Ryan offered her half his.  June took his glass and was going to pour half into her glass.  Did I mention June is 85?  And her hands are just a LITTLE shaky? So I told her I would pour it over the sink.  I quickly stood up, took both glasses out of her hands and walked over to the sink to pour the drink.  June was not happy.
"It's not like I was going to pour it on my shirt or anything." she stated loudly.
We all burst out laughing.  I don't know if she was being mean, or if she really was making a joke, but when we all laughed she did too so I am going with the joke.  I won't offer to serve her any food on Easter, but we will serve her a couple of Anita's Green Drinks and I'm sure I will have to relive the sausage incident a few times that day. 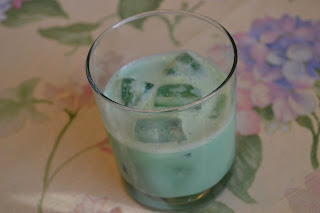 Pour all ingredients into a shaker over ice.  Shake well and strain into a glass with ice.

Email ThisBlogThis!Share to TwitterShare to FacebookShare to Pinterest
Labels: drink of the week, holidays