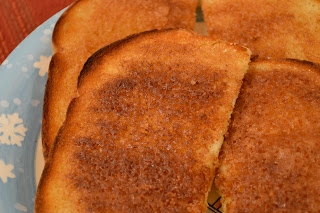 I was sick, I was sick bad.  Something was going around town and everyone had it.  Dave went to the store to get me some cold medicine.  The problem was that everyone in Fairbanks was sick and the stores were sold out of cold meds.  He went to three different stores and at the third store the only thing he found was the store brand of cold medicine that was sugar free.  He grabbed it and brought it home.

There I lay on the sofa, sniffling and aching in every joint.  He sweetly poured the cold medicine into the measuring cap and handed it to me.  I tipped my head back and swallowed the whole thing.  Now, no one in their right mind expects cold medicine to taste good, but this was like swallowing poison, and that is exactly what I told him.

"Are you trying to kill me?" I spat.
"What are you talking bout?" he innocently asked.
"That medicine, what is it?  It burned all the way down and I can't even begin to describe how awful it is."
"Oh, you're exaggerating." He scoffed.

Well, I didn't take another dose, I managed to get well on my own...and the next week guess who was sick on the sofa?  Yes, Dave.  I sweetly poured him a dose of the cold medicine and handed it to him.
"Bottoms up!" I sweetly cooed.
"Holy Sh**" he yelled. "What are you trying to do, poison me?"

Yep, we threw the rest away.  So now, around the first of October, I stock up on supplies to get us through the cold and flu season just so we aren't in that same position.  And I make broiled cinnamon-sugar toast.

This isn't really a recipe.  Everyone knows how to make sugar toast, but when you put it under the broiler, things change.  The sugar caramelizes, the cinnamon toasts, the butter melts into the bread...it is heaven.  I never made sugar toast this way, my husband first made it for me.  I would just butter a piece of toast and throw the cinnamon-sugar on it.

"You eat it raw?" he exclaimed the first time I made it for him.  "Here, let me show you how it is really done."

And, boy, was he right.  My husband has very good taste, he did marry me after all! 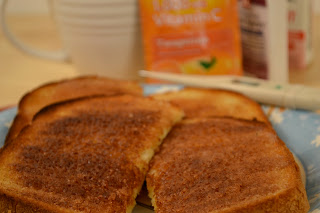 Toast bread, spread with butter, cover generously with cinnamon-sugar mixture.  Place under broiler until cinnamon-sugar melts and begins to bubble, being careful not to burn.

I guarantee this toast will make you feel better, no matter what you are suffering from.