Movie on the Plane and Chocolate Mousse 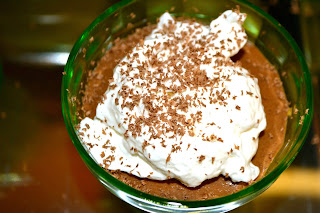 It started out as an innocent dinner conversation. We were talking about bear maulings and the Montana man who got mauled and then walked 3 miles and then posted on Facebook, because he really wasn't in a hurry to get to the hospital for the 8 hours of stitches he needed...

Then it moved to the movie The Revenant and the bear mauling in that movie. I said I never saw it, it was too gory and sad and I wasn't allowed.

Now that would have been fine, him thinking I saw it and me knowing I didn't, but then he had to throw in, "It was last December, and you were so drugged up from your hip surgery you just don't remember."

That got me to second guessing myself. Well crap, maybe I did see it and I just forgot. Could it be? No, I remember movies and I would have remembered that movie. And, if it was so close to my surgery that I was that drugged, Dave wouldn't have taken me to the movie or let me walk up all the stairs to the very top....still...

I sat through the rest of the meal wondering if I had indeed forgotten the whole movie.

And then it hit me.

"You saw it on the airplane." I stated.

The look on his face was priceless. I was right and he knew it, and he knew he had gone just a little too far with the "your were so drugged" comments.

So, while I won't rub his face in it forever, I will for a while. I was right, he was wrong (one in a row) and I didn't see the movie. And I will celebrate with chocolate! 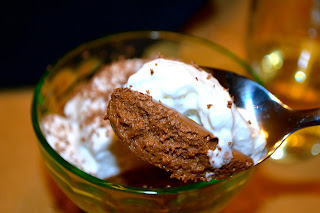 Combine Grand Mariner and milk in a small bowl, sprinkle gelatin on top and let stand to soften.

Place chocolate in a microwave-safe bowl and microwave on hight for 1 minutes.  Stir well, then continue to  heat in 30 second increments on hight until tow-thirds of the chocolate has melted, stirring well after each burst.

Bring 1 inch water to a bare simmer in a medium saucepan.  combine egg yolks, 3 tbsp. sugar and salt in a metal bowl large enough to rest in the pan without touching the water.  Set the bowl over the water and whisk constantly until the sugar dissolves, 1 to 2 minutes.  Add the gelatin mixture and whisk until it dissolves, about 1 minutes.  Remove from heat; whisk in the chocolate and vanilla.

Beat egg whites in a clean large bowl with and electric mixer on high until soft peaks form  Add the last 1 Tbsp. sugar and continue beating until the mixture holds stiff shiny peaks. 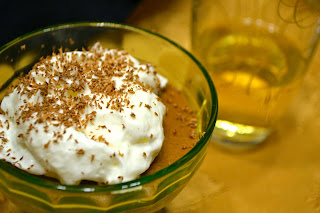 Cover and refrigerate until set, at least 2 hours.  Serve garnished with whipped cream and chocolate shavings, if desired.

1 year ago:   Sweet and Spicy Bacon and wanting a Monkey
3 years ago:  Sweet Potato and Black Bean Chili and Eating a Soap Ball
5 years ago:  Aztec Chocolate Cake and De-Santa-tizing the House