Who is the Horse Shoe Champion? Gingered Pear and Brandy Drink of the Week 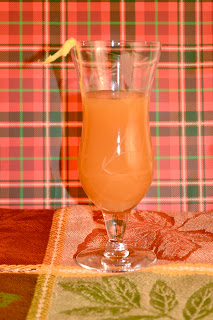 We had our last camping trip last weekend. It only snowed on us a little. We did a little four-wheeling, had a campfire, Dave went fishing while I read a good book, we played horse shoes, and Dave grilled huge steaks for dinner.  I think we did everything on Dave's list for the last camping trip.

So let's get to the horse shoe game.  I have never played horse shoes.  Dave and the kids play a lot, but with 5 kids, I've always been busy with other things.  With just Dave and I camping it was my perfect chance.  Now, I did take 5 steps in front of the horse shoe box so I was not at regulation distance.  We started the first game, the score was 11 to 0 (or something like that), Dave informed me that 13 to 0 was a skunk...I just couldn't have that, so I beat him.  Yes, I came from behind and beat him.  I did feel a little bad, so I told him we could play 2 out of 3.  You need to know that the last person to win the horse shoe game at our camping spot is the horse shoe champion for the winter, a very coveted title (for Dave).

We played the second game, and sure enough, Dave won.  We decided to pull up camp and play the last game after we cleaned up, just before we pulled out of camp.

We were playing the third game and it was 8 to 0, I finally made a point and we were both confident Dave would win and we could move on.  It was about 34 degrees and my fingers were getting cold.  As we played, I got back into the groove and ended up beating him 21-20.  So, who is the horse shoe champion until next spring?  Yep, that's right, this girl....even though I was 5 steps in front of the box I am holding that title and reminding Dave of it every chance I get...If you know Dave ask him who the champion is.

So to celebrate, we have Drink of the Week.  A wonderful blend of pear juice, gingered simple syrup, and cognac with a twist of lemon.  It is the perfect fall drink, warming and delicious.  It tastes even better when you are the horse shoe champion.

Fill a large martini shaker half full with ice.  Add sugar mixture, juice and cognac; shake until chilled.  Strain 1/2 cup mixture into each of 10 martini glasses.  Garnish each serving with 1 lemon twist.