Barbie Shots - Drink of the Week 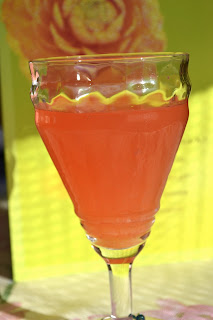 This drink is in honor of my dear friend Donna.  I met Donna when I transferred to the school she was teaching in.  My children were starting school and I wanted to be at school with them (Yes, I was one of those mothers).  We had classrooms just a few doors down from each other.

Now, I can't say we became fast friends.  It took us awhile.  I think I am the kind of person that has to grow on you.  I like to say I am an acquired taste, like blue cheese or oaky wine. Well, Donna wasn't having much of that.  We were polite and friendly, like with any other stranger you run into.

The next year, I adopted my daughter, she was the same age as Donna's daughter.  We decided to pool resources and lead a Girl Scout troop together.  We planned, met with the girls, organized outings, wrote letters to parents, organized cookie sales, and became friends.  We began to sew together on Friday nights, walk together in the mornings during the summer, then we began to meet on Saturday mornings for coffee.  Donna is such a dear friend.

Years after we became friends we were talking and Donna informed me the reason she was a little cool to the idea of a friendship with me was because she thought I was a Barbie.  Now, what the hell did that mean?  So I asked her in my kindest voice, "What the hell does that mean?"

Hmm, I sometimes wonder about my self-esteem if this is one of my dearest and best friends.

Well, I think she has since learned there is more to me than hairspray and lipstick (ya, like a mouth like a sailor, neuroses left and right and a really warped sense of humor).  But I can't let it all show at the same time or people will be banging down the door wanting to be my friend.

So, here  is to Donna, and her continuing friendship with her idea of a Barbie! 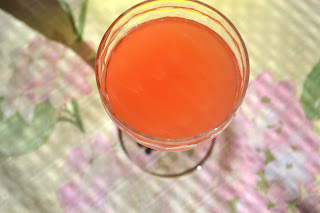 Add ice to shaker, pour in rum, vodka, and both juices, shake until very cold, strain into glass.