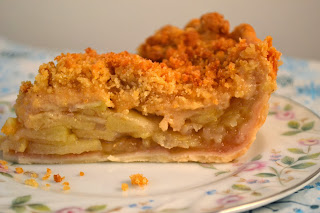 It is funny how you learn things about your spouse every day, even after years of living together.  Dave and I have been married for over 14 years and I'm still learning...like how he is a poor loser in Words with Friends.

We play a lot of Words with Friends.  I think I have 9 games going right now.  I do lose most of them and I always lose to Dave, almost always.  So the other night, when I won, and scored over 400 points I was pretty pleased with myself.  I didn't even rub it in, because it was the first game I beat him in since, like, July!  He said,  "Good game." I said, "One in a row!" and our rule is the winner starts the next game.  We figure it gives the second player a slight advantage with their first move because they have the extra letters to work with.

"Oh, sorry honey, I accidently hit don't accept.  Start another game." he laughs from the sofa. 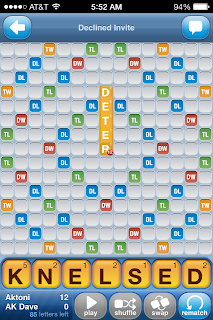 "What, you didn't accept?  I win one game in 6 months and you have a problem with that?" I was a little irritated, but started the next game.  I knew God was helping me out, because this time I had a Z and I could play it on a double word score!  I played and hit send. 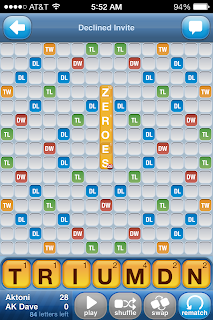 One time I can understand a mistake, but two times... 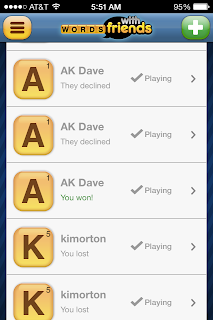 I went to bed claiming I would never play Words with Friends with him again.

I made a Dutch apple pie.  I don't know what makes it Dutch, except it has a crumble top, not a crust.  I made it for the Chick, she said it was her favorite kind of pie.  I think I ate half of it. 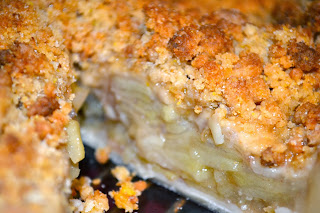 Line pie plate with crust (use your favorite or a store bought if you are lazy like me).

Place pie plate on a foil lined baking sheet and bake for 40-45 minutes, or until the crumble is nicely browned.
1 year ago:  Coquito - Drink of the Week
2 years ago: Bar-B-Que and Bird Feeders