Tucker on the Sofa and Pumpkin Brownies 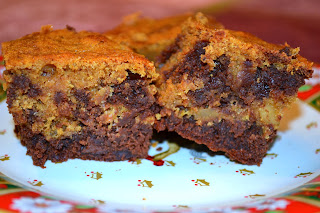 We are a little over-run with dogs now.  Our five and the kid's two are just overwhelming...I don't even like dogs that much, at least not seven dogs worth.

The kid's dogs kennel in their own little kennels in the kid's room, and our dogs kennel in the garage when we leave.  All our dogs kennel, except Tucker.  Tucker is just a little crazy.  He has some anxiety about kenneling and he was eating the wood part of the kennel, the walls of the kennel and just being overall crazy.  So we started leaving him in the house and the rest of the dogs kenneled.  It worked just fine...until I realized that he was sleeping on the sofa while we were gone.

Dave looks up, whips out his phone, calls the house and says, "TUCKER GET OFF THE SOFA." over the answering machine.

Tucker jumps up, hops off the sofa and lays down on the floor.

"Good boy, Tucker." Dave says and hangs up the phone.

So now, at random times during the day, I'm going to call the house and tell Tucker to get off the sofa.  We will see how long that works.

My friend Donna, brought these brownies over on the Wednesday before Thanksgiving.  It is our annual drinking pie making evening.  These brownies were delicious!  And perfect with our coffee, Kahlua, pumpkin creamer combo we always drink that night.  I had to make more (of the brownies) so I could take some to work and share.  It is the season of eating  sharing, you know. 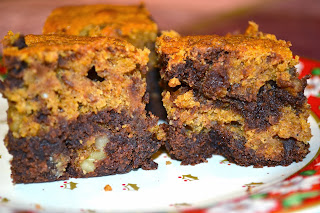 Pumpkin Brownies
from my friend Donna who got them from Allreipes 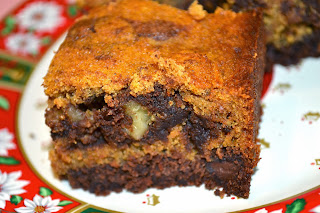 1 year ago:  Cranberry and Pistachio Shortbread Cookies
2 years ago: Chinook Winds- Drink of the Week