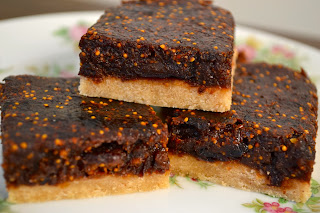 "One, two, three, four, five, six, seven.  They are all in," the Chick exclaimed as the dogs came running in from the cold.

We have a new game at our house.  It is called "Count the dogs as they run through the door into the house at -20."  It is a game born of necessity.  With three big dogs and four little dogs running into the house all at the same time, it is easy to lose track of who is in and who isn't.  And, at -20 or colder, it could be a real problem for a dog who doesn't usually bark.

This game started after I left Lilly outside.  All the other dogs were in, but Lilly is a sniffer and she was busy sniffing around behind the storage shed because other dogs live on the other side of the fence there.  It was one of those -25° days. We were all in the house and about 5 minutes later I said, "Where's Lilly?" thinking she was upstairs chewing something up...

Nope, she was still outside, looking at the door, lifting one paw and then another because they were so cold, but she never barked.  She is the smallest of the big dogs, but a big dog none-the-less, so no harm- no foul.

Then one morning I left Hershey outside.  He is a small dog, again no bark and colder than -20.  That is a problem.  After I told everyone what I had done, the Chick starting counting the dogs, ALOUD, as they ran in.  So now everyone does it.

Over the weekend the Hippy boy (our oldest) came for a visit and took Tucker home for a sleep-over.  The next morning, the Baby boy spent a while looking, calling and getting his coat on to search for Tucker in the back yard.  When the dogs ran in he only counted to 6.  He forgot Tucker was gone!

So, one of my favorite winter fruits is figs.  I love figs, but in Fairbanks the best way to get them is dried, fresh figs just don't make it well up here.  So these cookies are made with dried figs.  If you have a good supply of fresh figs you could use those (I'm guessing here), just cook the figs longer and evaporate the extra moisture until they are good and jammy.  These are not very sweet.  The Bboy and the Chick didn't care for them because of that, you could add more sweetener if you like a sweeter cookie. 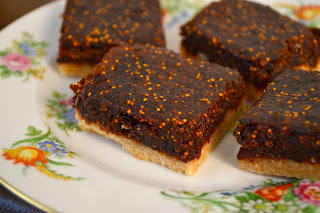 In a bowl, whisk together flour, baking powder, cinnamon and salt.  In another bowl, beat butter and 1/2 cup of the sugar for 2 minutes, until fluffy.  Beat in vanilla extract.  Pour in flour and beat on low until well combined.  Press firmly and evenly (the flat side of a measuring cup works well) into the foil lined pan.

Bake for 25 minutes.  Cool completely.  Remove from pan by lifting foil and place on cutting board.  Cut into 36 pieces.

1 year ago: When my husband tried to kill me with Cold Medicine and Cinnamon Toast
2 years ago: Caramel Rolls and Black Friday Shopping