Roast Chicken with Mushrooms and Peas 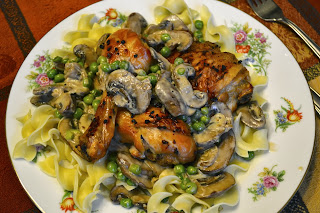 When I was seven my mom moved us from the perfect place on earth, also known as California, to western Kansas.  I was used to ocean, mild weather, big neighborhoods, swimming pools...all those important things for a child.  We moved to a town of about 800  people, wind, a town with dirt roads (well, main street was paved), wind, 17 kids in my whole grade level, wind, and we moved in September so we were just getting ready for winter, and did I mention wind?

It was a very quiet town and so very different from the bay area I was used to.  My mom is an exceptionally creative person and a quiet town, with lots of time to think and plan, was either good for her creative juices or just plain trouble.

On Halloween that first year, I was sitting at my desk in my second grade class, struggling with a math problem.  The door burst open and two witches flew  into the room.  They were dressed in traditional witch black, pointed hats, long stringy hair and big noses, dragging their brooms they just flew in, screeching and cackling.  Holy shit! (or what ever 7 year olds think before they become as foul mouthed as I became).

They were throwing candy on everyone's desk, they swooped through the room, and were gone.  Now, I had seen the Wizard of Oz, and I knew there were witches in Kansas, so these must have been the witches that weren't in the movie! 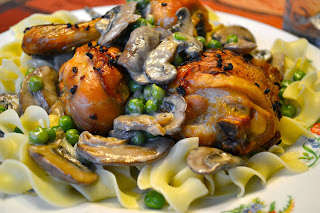 Of course the rest of the day was shot for the poor teacher.  She let us go out for an extra recess after that, as did all the classes since the witches had visited all 6 classrooms of our school.  Everyone was excited and buzzing about the visit.  Those poor dumb country kids couldn't figure out who it was.  I knew, again, I had just watched the Wizard of Oz before we moved and I had it on good authority (my mom), that witches were in good health in Kansas.  My cousin thought she knew who the witches were and I asked her when she had met a witch before that she would know them.  She just rolled her eyes at me.

We eventually made our way back into the school, had our Halloween party and then went home.  My cousin and I walked through the front door and HOLY SHIT! there sat the witches...but the hats, wigs and noses were gone and it was MY MOM and my aunt.  They were having an afternoon cocktail and reliving the expressions on every teacher's face when they appeared in each room.  Cackling as they only they could.

I was in awe that my mom could pull this off.  Not only come up with such a costume in this small town, but to have thought of it and pulled it off without anyone knowing who it was.  The town talked about it for months and no one was the wiser.

I began to worry, I hoped those real witches didn't mind that my mom dressed up like them, I always kept my eyes out for them, just in case. 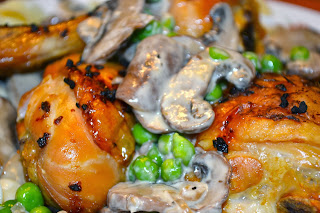 This chicken comes out of the oven with a crisp skin and juicy meat.  Make sure you are careful about getting the garlic off the chicken when you remove it from the brine, it will burn if you leave it on (see picture).  Marinating the chicken adds so much flavor, make sure you plan enough time for that step.

Position a rack in the center of the oven and heat the oven to 450°F.

Whisk the olive oil, vinegar, lemon juice and 2 tsp. of the garlic in a shallow bowl.  Add the chicken, turn to oat, and let sit at room temperature, turing occasionally, for 30 minutes.

Put the chicken skin side up on a rack set over a large rimmed baking sheet (reserve the marinade).  Season well with salt and pepper.  Roast for 10 minutes, lower the heat to 375°F, and roast until the skin is deep golden and the meat is cooked through (165°F) about 30 minutes more.

Meanwhile, melt the butter in a 12 inch heavy-duty skillet over medium heat.  Add the reserved marinade and the shallots.  Cook, stirring, until tender and lightly browned, 3-4 minutes.

Add the sliced mushrooms and cook. stirring frequently, until tender and golden-brown on some sides, about 3 minutes.  Add the remaining garlic and cook, stirring, until fragrant, about 1 minute.  Add the wind and simmer for 1 minute.  Remove from the heat.  Set aside 1/2 cup of the mushrooms and cover to keep warm.

Transfer the chicken to a plate, reserving the juice in the baking sheet and scraping up any browned bits.  Put the skillet with the mushroom mixture over medium-high heat and add the chicken drippings, cream, peas, 3/4 tsp. of salt, and 1/2 tsp. of pepper.  Cook until thickened to a sauce consistency, about 2 minutes.  Remove from the heat, add 2 tsp. of the tarragon, and season to taste.  Divide the sauce among four shallow bowls and top with the chicken, Sprinkle with the reserved mushrooms and the remaining tarragon, and serve.

Email ThisBlogThis!Share to TwitterShare to FacebookShare to Pinterest
Labels: chicken