Trying to Steal a Dog and Spaghetti Squash Pizza 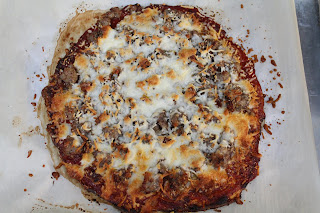 We were out to lunch with some friends.  We had just finished up and were walking out to our cars.  Dave saw a scrawny little dog in the parking lot and walked back in to see if it belonged to anyone in the diner.
The little dog was one of those just-a-little-fluff-for-fur kind of dogs and was wandering around and holding up one paw and then another because he was so cold.  I walked up to the puppy, crouched down and called him over. He tentatively came over and I petted him a little and then tried to pick it up.  The dog, of course, darted away.  I started calling him over again and the man in the pickup (who was looking at his phone and not paying any attention to this little, cold puppy) opened his truck door and the dog jumped right in.

I apologized for trying to steal his dog. But the dog was cold and the guy in the truck wasn't paying attention to him so who knew this guy owned the dog. 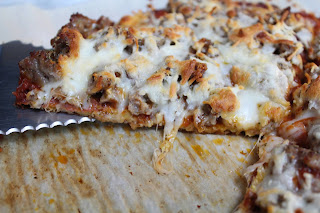 CAREFULLY poke about 5-7 vents in spaghetti squash (I use a sharp knife and my husband yells at me if he sees me do it)  Microwave for 5 minutes.

Cut squash in half and use a spoon to remove seeds.  Place squash, cut side down, on a parchment lined baking sheet.  Bake for 20-30 minutes until soft.  Alternatively, you can cook in your microwave.

Using a fork, remove strands of squash out of the shell and place in a clean towel.  Let cook until you can handle it.  Squeeze as much liquid out of the squash as possible.  You can't get this too dry.  When all the liquid is squeezed out, place in a medium size bowl.  All all the other ingredients and mix well. 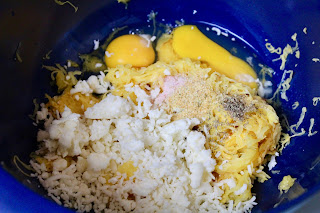 On a parchment lined sheet pan, pat the dough into a 10-12 inch circle.  Bake for 20-25 minutes until set and nicely browned.  Turn crust over and bake for 5 more minutes, remove from oven.

Top with pizza toppings of your choice.  We like red sauce, sausage, pepperoni, bacon, mozzarella, parm and a light sprinkle of red pepper flakes.

Return to oven and bake until cheese is melted and golden brown.