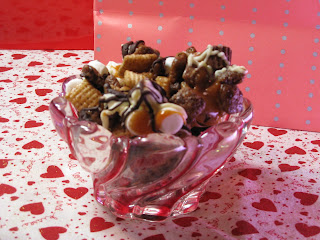 In honor of the sweetheart's holiday, Valentine's Day, and because everywhere I turn around I see something that is supposed to be "better than sex" (my grandmother gave me a cake recipe called the same thing, it will come later this week), I have dedicated this week to all things labeled or named "Better Than Sex"  Personally, I am not convinced, but I'll share these recipes with you.
My curiosity with the BTS (better than sex) label on all these things started a couple of months ago when I started to clean out my very old and disorganized recipe box.  I noticed I had a couple of cake recipes that all had similar names, but very different ingredients.  One cake was called Better than Sex (from my grandma), one was Better than Robert Redford (from an older teacher I worked with about 20 years ago), one was Better than Brad Pitt (from a younger teacher I worked with, but about 15 years ago).  I know it will be time to throw my hat in when someone gives me a cake called Better than Justin Bieber!  I then ran across a drink called BTS I'll share on Friday and now a Chex-Mix called BTS.  So, a week of things that are BTS (I'm not going to take a poll at the end of the week to see if you agree if any of these things are BTS, really).
I made a big batch of this, put some in these heart boxes shown below and some in clear cellophane bags and added a pretty bow as a gift for co-workers.  I didn't put the name on it, I do work in a school building after all, just a pink card with Happy Valentine's Day. 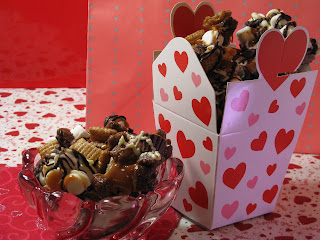