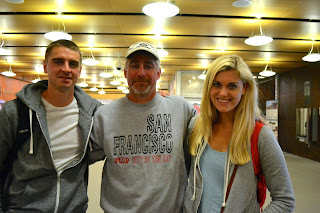 I have a confession; you were all part of a plot.  A plot to surprise my husband.  When I posted about ruining the surprise that my Curly Haired Boy and the DIL were coming for Memorial Day, it was a ploy to trick my husband.  He was not agreeing to stay in town and camp with me for Memorial day and I really needed him to be here because the real surprise was that I was bringing the Blond Boy and the DIL up from San Diego.  We hadn't seen them for a year, and it was time. So this was part of a big, fat lie.

I did get Dave a ticket to fly to San Diego for Father's Day.  And I told him he has gone too long without seeing the Blond kids.  Then I said I wanted them to come here for Memorial Day, but they couldn't.  But, when I said I wanted to go camping at our family spot, he had other plans.  Dave wanted to go to Tazleena and help friends put in their fish wheels, he has done that the last two years, and he was ready to do it again, but I had purchased tickets for the Blond kids and Tazleena was too far away for their schedules.  So in came plan B.

Dave knew something was up because I was being so pushy, O.K.  I am usually pushy, but not about Memorial Weekend.  I usually stay home and plant all weekend, but this year I was going camping.  Then, I said I didn't want to go to Tazleena, I wanted to go to our spot.  I could tell he was getting suspicious, so I decided to tell him the Seattle kids were coming and pretend I did it on accident.  It worked, he knew something was up and this gave him the perfect reason.  And when he read it on my blog, it was cemented.

So, on Thursday morning at 2:00 am, we were at the airport waiting for the Curly Haired Boy and the very preggo DIL to get off the plane...but the Blond kids got off!  He was surprised, even though he said he had an idea they were coming (sure).  We had to tell him the Seattle kids weren't coming because the Dr. wouldn't let the preggo DIL fly this late in her pregnancy.

Then, I had to tell Dave I had a budget meeting on Friday afternoon, because the Seattle kids really were coming, but not until Friday night.  I then sent word out to the camp spot via my niece (we don't get cell phone service out there) that I had a migraine and would come out in the morning.  Really, I picked up the Seattle kids at midnight, went home to bed and drove them out in the morning.

When I pulled up, the look on Dave's face was priceless!  We had all four boys and their chicks around the campfire and we loved every minute.  I won't be able to pull off a surprise like that for years.  Dave keeps telling me he won't ever believe anything I tell him again.
It was worth it.


What did you do for Memorial Day Weekend?

1 year ago:   Chili-Garlic Snack Mix
2 years ago:  Donut Strawberry Shortcake and going to work at 5:00 am
3 years ago:  Key Lime Flan
4 years ago:  Filet with Red Pepper Coulis and Avocado Butter