Peaches and Basil with Almond Shortcake 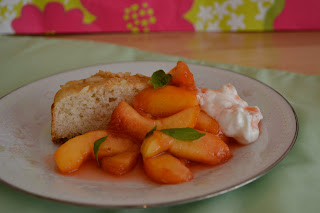 My neighbor lost her dog the other day.  They were driving through the neighborhood searching, my husband and brother in law also jumped into their cars and were looking.  Everyone spent about 2 hours slowly driving up and down the neighborhood streets, calling for Theo and asking anyone they saw if Theo had passed by.
I stayed home and manned the phone.  When the neighbors got home they discovered Theo locked in the girl's bathroom!  They were so embarrassed that everyone was looking for the dog that was safely, but unhappily, locked in the bathroom.  She came over to apologize and we told her it was the kind of happy ending we like.
It also reminded us of times when we lost something and it was right under our noses, like the time I lost Zachary when he was three.  At the time, we lived in a house in the country, next to two different ponds.  I was very careful to keep tabs on Zach, especially if we were outside.  One day I needed to make a dessert, so I sent Zach to play in his room and I made a shortcake for a fruit topping.  I heard him playing and then got involved in what I was doing.  I put the shortcake into the oven and the house was really quiet, I mean REALLY quiet.  I went to check on Zach, he wasn't in his room, not downstairs in my room, not the playroom.  I started to feel a little nervous.  I went to the yard, he wasn't there, checked with the neighbors across the street and next door - nope.  Walked the three blocks to the sitter's house, not there.  By this time I was panicked and a little hysterical.  Everyone in the neighborhood was looking for Zach.  Finally, one of the neighbors said it was time to call the Troopers and report him missing.  I was just sick.
I called the troopers, explained what happened and mentioned the two ponds by our house.  Yes, he had been told never to go there by himself, but he was 3 and loved to fish.  I explained how the whole neighborhood was looking for him, and no one had seen him yet.  The Troopers quickly responded.  The first Trooper took my statement while the other Trooper talked to the neighbors.  I told the Trooper that I had been baking, went looking for Zach and couldn't find him.  The Trooper said, "Did you look in his room?"
WHAT, DID I LOOK IN HIS ROOM, ARE YOU KIDDING ME, THAT IS THE FIRST PLACE I LOOKED ABOUT 2 HOURS AGO!
"Why yes, that was the first place I looked." I answered politely.
The Trooper asked which was Zach's room and I showed him down the hall.  He walked in and in about 15 seconds walked out carrying Zachary sound asleep!  How on earth had he done that?  I searched the room, under the bed, behind the door.
Zach had climbed into his laundry hamper, shut the lid and fell asleep.  I felt like an idiot.  Thankfully, the Trooper laughed and said it was the kind of happy ending he liked. I apologized over and over. He said he had young kids and this was better than the call he had earlier (he didn't elaborate).  There I stood sobbing like an idiot (did I mention I was about 81/2 months pregnant?) clinging to my sleepy toddler who didn't know what was going on and apologizing over and over.  Troopers don't get paid enough.

While this is not the same recipe I was using that day (it was such a stressful day I don't even remember if I ever took that shortcake out of the oven) this is a delicious combination.  The almond shortcake is the perfect base for the sweet peaches scented with basil.  Make the peaches first and let the flavors meld while you whip up the shortcake.  Serve with Greek yogurt and spoon some of the peach juice over the top. 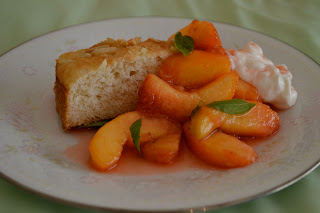