Pizza on the grill 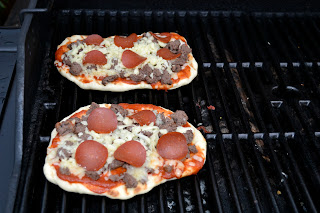 I thinks summer is really here.  We are having beautiful sunny days, and then as soon as I walk out of my office, it starts to rain.  We always joked that if you don't like the weather in Fairbanks, wait 15 minutes and it will change.
We've been waiting to try pizza on the grill for a clear night.  We finally gave up and made these pizzas in the rain.  Pizza is one of my favorite foods.  I believe you should be able to live off ice cream and pizza, and for a few years I think I did!
I made the dough, Dave and I shaped it, he did a better job than I did, and then put the crust on the grill.  Cooked the first side, turned it over, added toppings and finished cooking the whole thing.  I really meant to take pictures of the plain crust on the grill, but it was raining and I am made of sugar (I didn't want to melt). 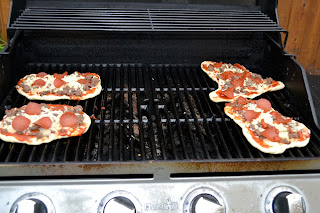 Dave kept the middle burners on and the side burners low and we cooked the pizza over indirect heat.  Can you tell which two are mine (my crusts were thinner and crisp, the way I like.  At least that's my story).  This was easy and fun.  We are going to have a backyard party and have everyone create their own pizzas.  I'll have the dough ready, they can shape their own crust, Dave will cook and then each person can add toppings from a topping bar.  I think it will be fun.  As long as it isn't raining. 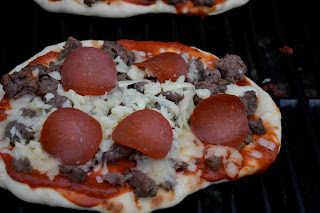 Pizza on the Grill

Toppings
pizza sauce, store bought or homemade
cheese
meat and veggie toppings of your choice (living with a meat lover we had moose sausage and pepperoni)

Preheat grill, once heated turn off half the burners.
Combine 1 cup flour, east, sugar and salt in a large bowl.  Add water and oil.  Mix together until well blended.
Add 1/2 cup flour until soft dough ball forms, it may be slightly sticky.   Add additional flour as needed to form dough ball.
Kneed on floured surface adding additional flour until a smooth elastic ball is formed (about 4 minutes).    Cut dough into 4 equal pieces (I weighed my dough to get equal amounts).  Shape dough into circles (or odd oblong shapes if you like that).  Place dough on grill over indirect heat and cook until crust is browned nicely and has good grill marks (about 4 minutes depending on the thickness of your crust), turn crusts over using tongs.  Top crusts with pizza sauce, cheese and your choice of toppings.  Cook until crust is browned on bottom and cheese is melted.
June 18, 2012     Daylight  21 hours, 49 minutes     Temp.  70ºF