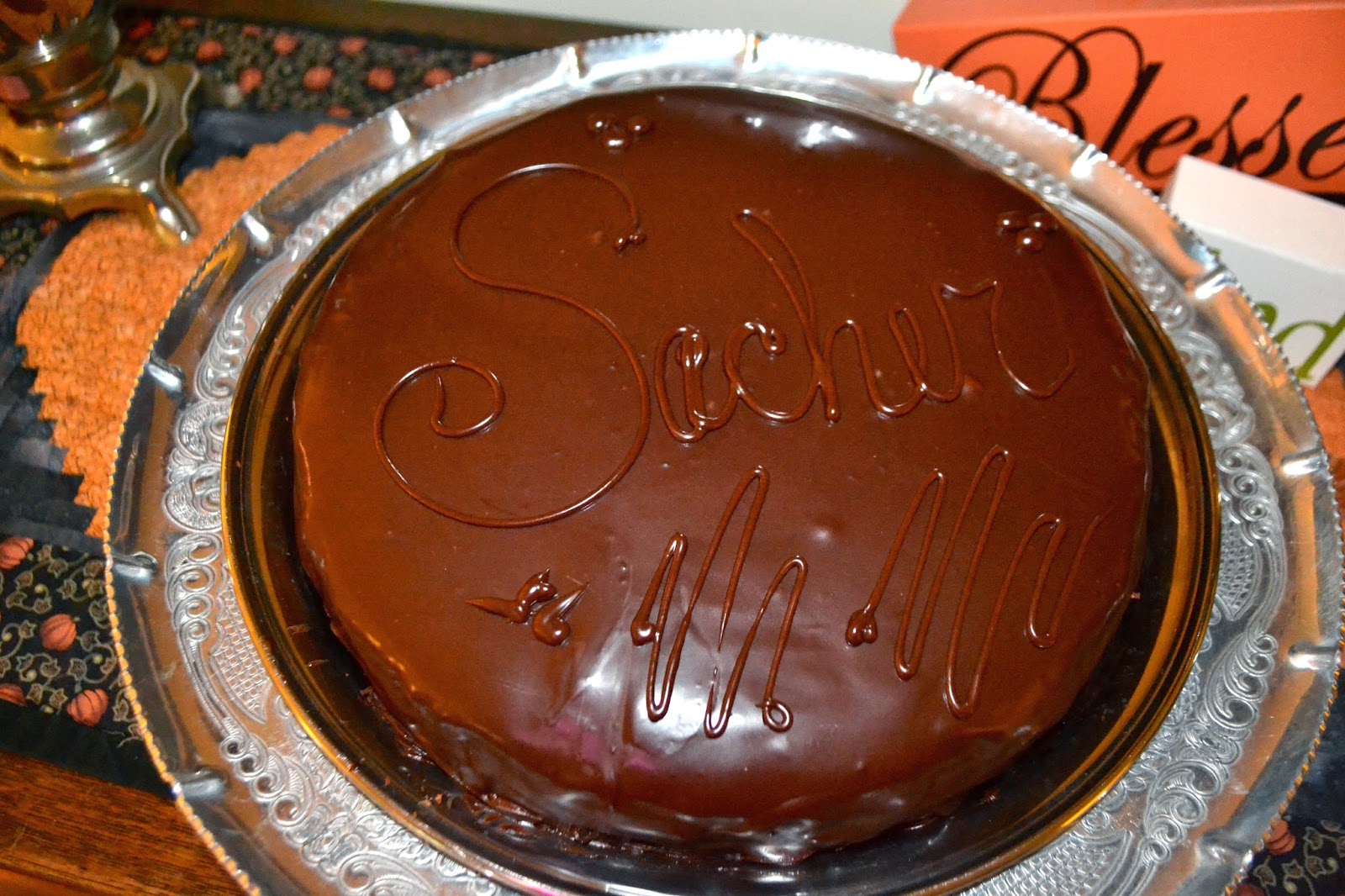 I made it for a birthday in our office.  I did cheat a little and used a chocolate ganache glaze instead of the one listed in the challenge, but everyone was posting about how it didn't work out for them and I was taking this to work to feed other people, and so I fell back on a tried and true ganache.  So, in reality, I did half of the Daring Baker's Challenge.  Maybe I'll get the whole thing done for November, but don't hold your breath.


Sacher Torte
from the Daring Kitchen

Preheat oven to 375°F, with a rack in the center of the oven.  Butter and flour the sides of a 9 inch springform pan, then line the bottom with a circle of parchment paper.

Place the bittersweet chocolate in a heat-proof bowl and microwave in 30 second intervals until just melted.  Set aside to cool completely, stirring often.

Beat in the egg yolks, one at a time, scraping down the sides of the bowl.

Add the cooled chocolate and vanilla and beat until well-mixed and very light and creamy, scraping down the sides of the bowl.

Stir together the flour and salt and sift half of it over the chocolate mixture.  Fold in with a spatula until almost incorporated.  Sift over the remaining flour and fold to combine completely.

Spread the batter evenly in the prepared springform pan.  Bake in the preheated oven for 35-40 minutes.  The cake will crack and dome in the middle as it bakes, but will flatten out as it cools.

Cool the pan for 10 minutes, then run a knife around the edge to loosen it from the pan and remove the sides.  Carefully invert the cake onto a rack and remove the bottom  of the pan and parchment paper, then turn the cake right side up onto the rack and allow to cool completely.

Turn the cake upside-down so the perfectly flat bottom of the cake is now the top.  Cut the cake horizontally into 2 even layers.

Place 1 cake layer on a cardboard cake round and spread it generously with about half of the apricot glaze.  Allow it to soak in.

Place the second cake layer on top and spread the top and sides with the rest of the apricot glaze.  Work quickly before the glaze has a chance to set and use a metal offset spatula to smooth the top.  Place the cake on a rack set over a plate or baking sheet lined with waxed paper and allow the apricot glaze to set.

Make the chocolate ganache and set aside about 1/3 cup. Pour the rest over the top of the cake, first around the edge and then in the middle.  Spread the excess glaze over any bare spots using a metal offset spatula.  Before the glaze has set, move the cake to a serving platter.

With the extra ganache, pipe the work "Sacher" in the middle of the cake and add any decorative flourishes you wish.  chill the cake until the glaze is completely set, at least one hour.

Boil the jam and the rum in a small saucepan over medium heat.
Cook stirring often, until the mixture thickens and drips slowly from the spoon, about 2-3 minutes.  Cool slightly an use warm.

Heat cream in small saucepan until almost boiling, remove from heat.  Stir in chocolate, stirring until chocolate is completely melted.  Use warm.

1 year ago:   S'More Martini and the Joys of a Fire
2 years ago:  Vanilla-Chocolate Martini and Death of a Sewing Maching